Let us share with you how Trust began…Learn how we evolved from one man and a dream to industry leaders and a nationwide electric heating brand.

Trust is hard to find... but we know when it is lost

At Trust we wanted to build and restore the confidence in the consumer. Buying electric heating is a straightforward process – but only if you have the correct facts to begin with. We believe in the UK there are a few fundamental forces that hold our country together – the one that’s the glue of society is called Trust. Having Trust cements a relationship with a company and makes the consumer feel safe, informed and in control. With an absence of Trust all we have is misunderstanding, confusion and underhand sales processes. 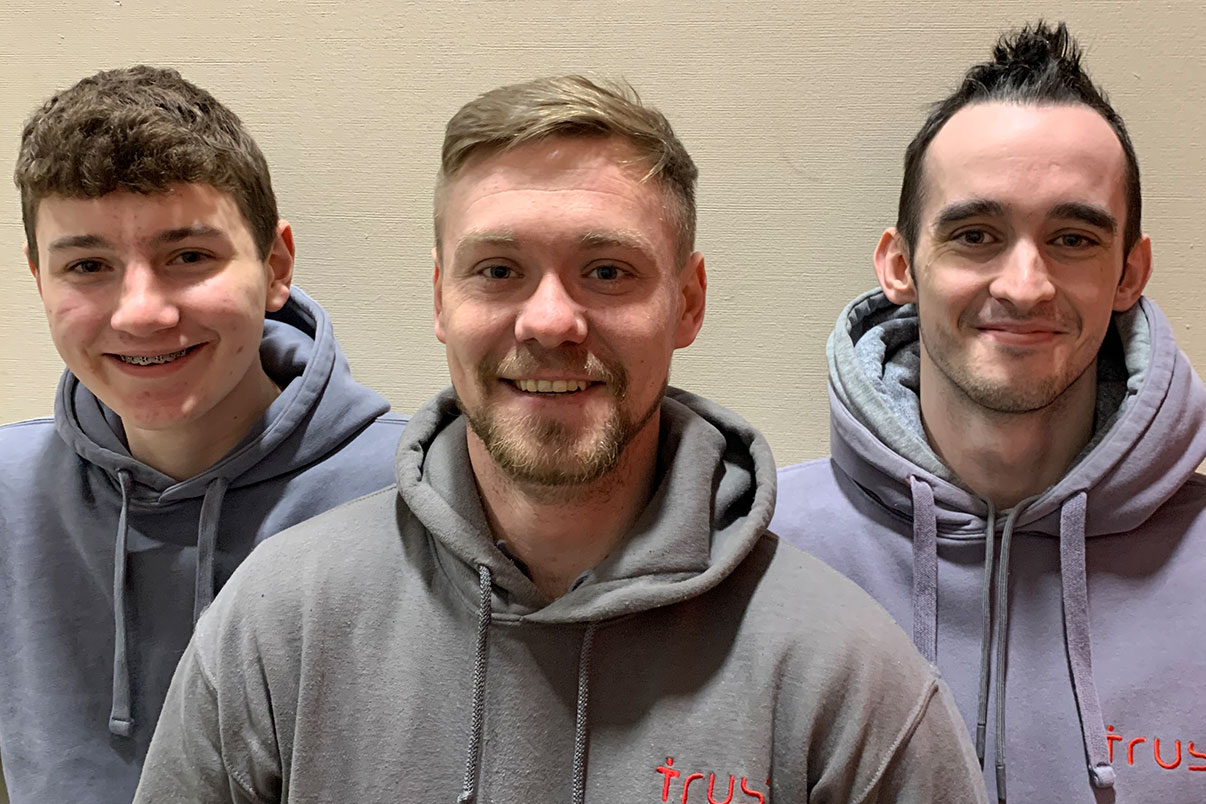 Nobody ever says, "I want to sell radiators when I grow up"

Scott Conor certainly did not, as he joined the Armed Forces at the young age of seventeen, he wanted adventure, travel, and physical challenge. Scott said the Army provided him with great educational and career benefits and he certainly had adventures and challenges working in the UK. He was also stationed in Germany, Bosnia and Beirut, and fought in the Gulf War.

We also offer 10% off for veterans, mention it when you order. See if you’re applicable here: www.defencediscountservice.co.uk

After leaving the Army, Scott ventured into the Oil Industry, this is where he first started to explore the wonders of heating. Over the years, Scott’s fascination grew into the intricacies of heat conduction, from this interest, he worked in several heating companies across the UK. But Scott had a dream, he knew he could create a smarter way of conserving energy whilst heating a room. So, when Scott told his wife that he wanted to leave his career to set up his own heating company, his wife's reaction dramatically altered the course of both of their lives.

"If you're going to go and set up your own company, then let’s do it together!" 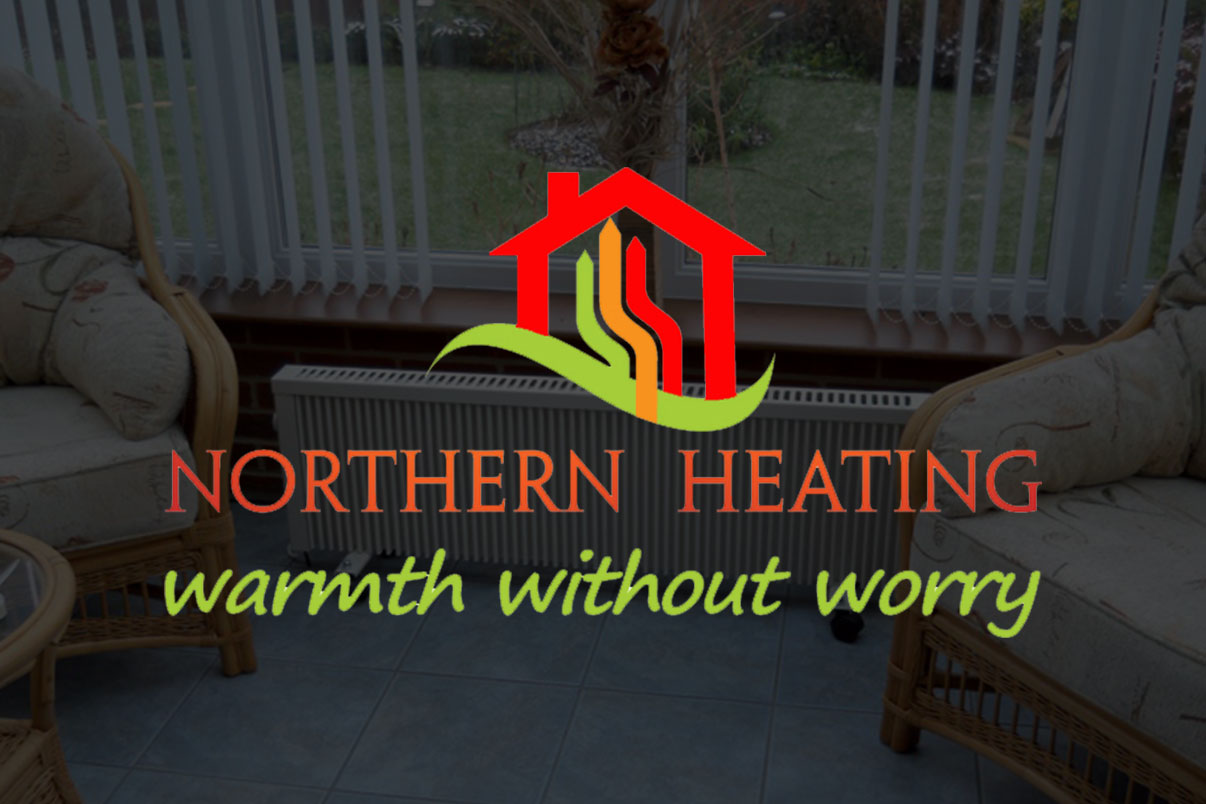 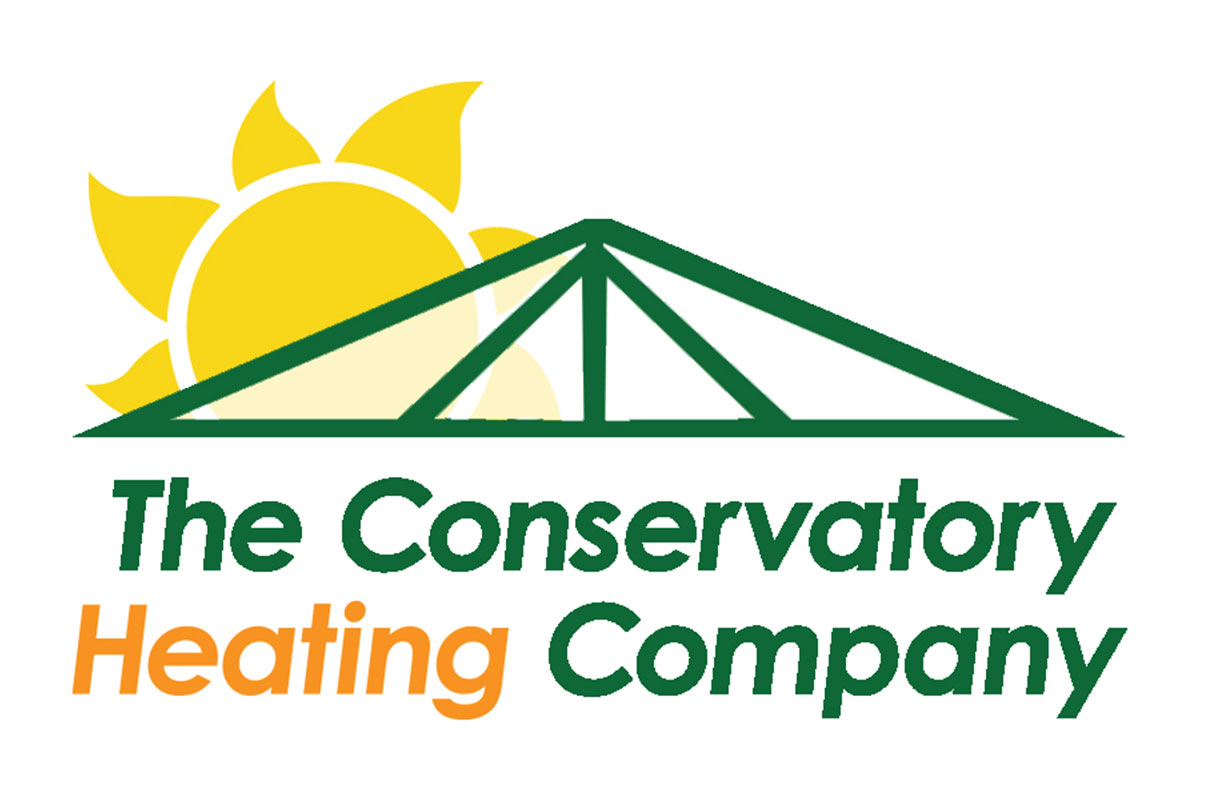 At the beginning, it was literally two people with one van, importing German electric radiators from Elkotherm and selling them in the north of the UK. After initial success, they found there was a need for heaters specifically for conservatories, due to this, the second company was born - The Conservatory Heating Company. Also, a relationship was formed with Clearview Home view Improvements, a nationwide heating installer.

They had one challenge, the turnaround from sale to installation, due to importing from Germany. The minimum of 6-8 weeks, which Scott found was a long time for someone to wait for their heating. Fiona, his wife, was never a fan of waiting or for the company to be small. This is when they started searching for an investor Knaresborough Investments, which is backed by Steve Parkin, who is the Chairman and Founder of Clipper Logistics PLC.

Their dreams soon became a reality when they moved into their very first building and took on one member of staff. Find out more here. 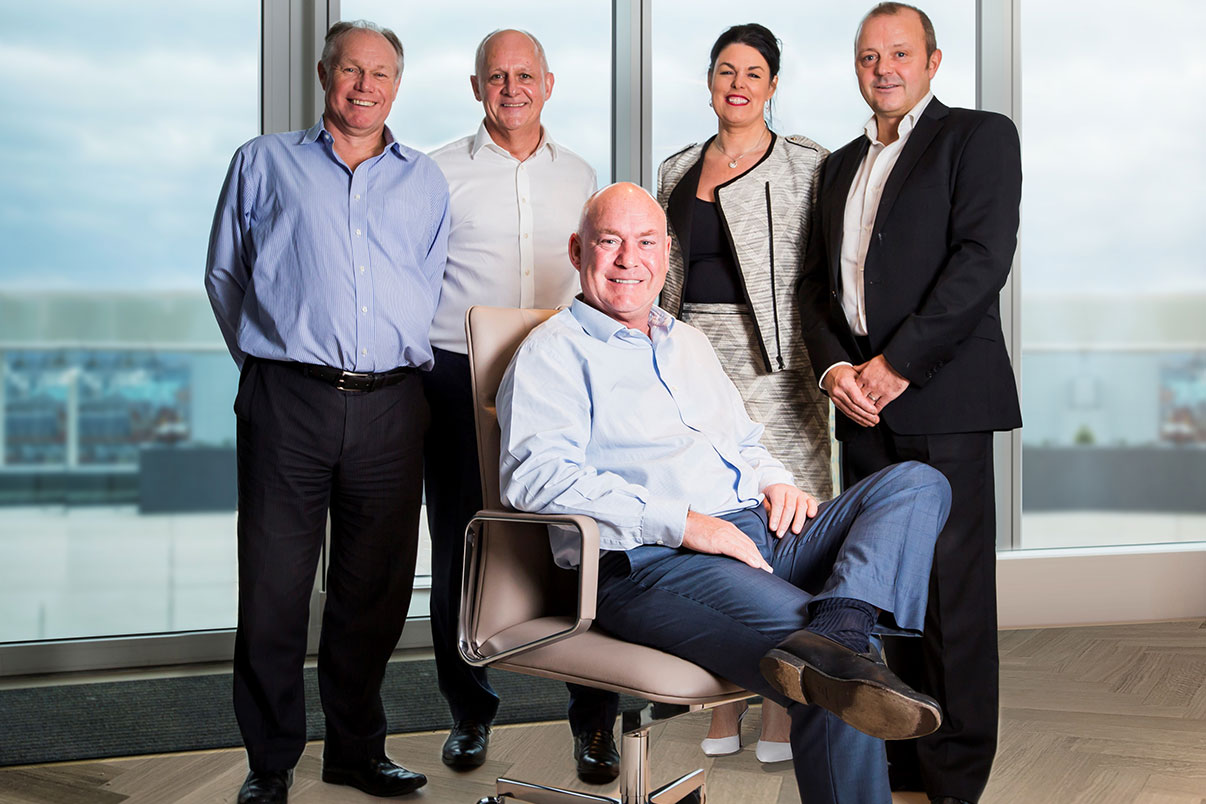 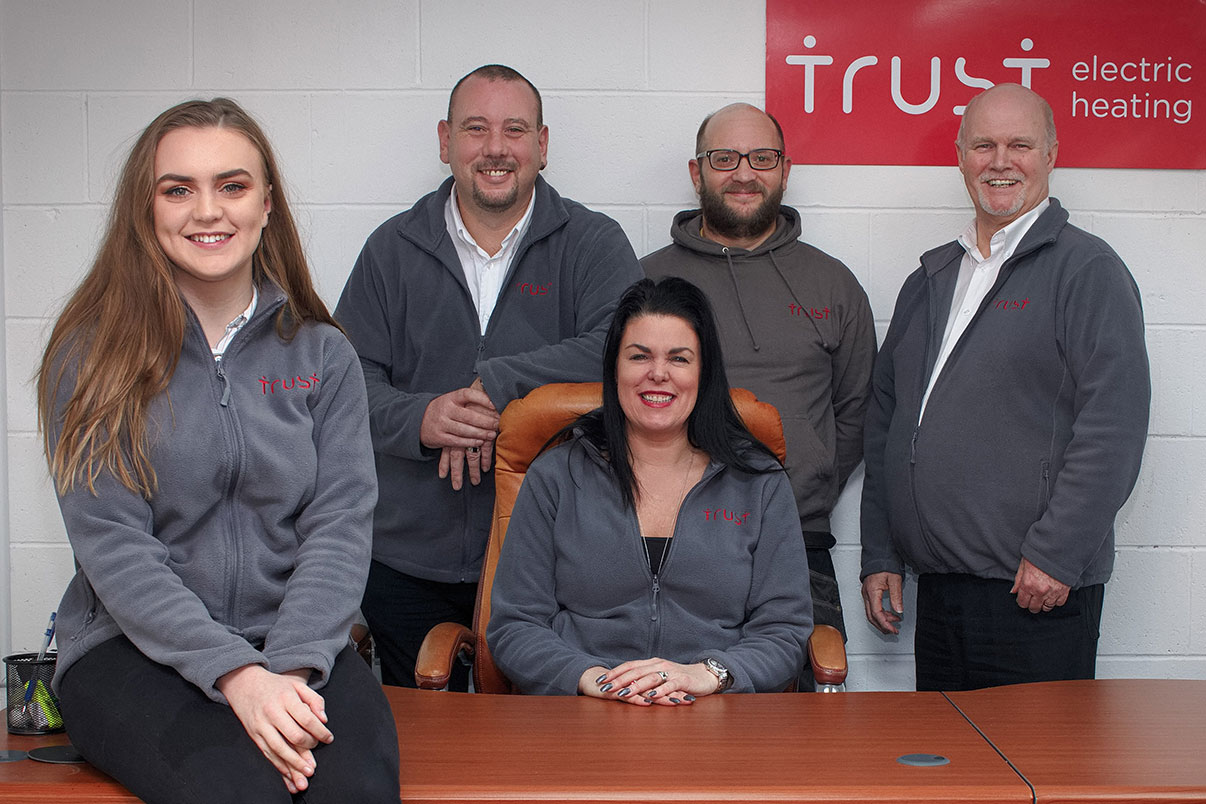 Now with a team of five, they all poured their heart and souls into making the company a success, however they knew to become an industry leader they had to be bigger than just servicing the North. In conjunction with the name change, they found that consumers had a lack of understanding about electric heating, this meant that customers had to be educated and guided by industry leaders. This put customers into a vulnerable position as they had to put faith and belief in a business they were engaging with. In 2017 they changed their name to Trust Electric Heating. This was for 2 reasons, the first was so we could operate across the whole of the UK with a generic name, but the most important factor was to address the mistrust that was found in the heating industry.

Trust found that the four major fears of buying heating were:

1. Dealing with a salesperson
2. Buying remorse
3. Buying something that doesn’t do what it says on the tin.
4. Being ripped off (paying too much for a low value product).

Trust wanted to overcome those fears, by designing the Trust Promise as this would enable the company to have a strong and trustworthy relationship with the customer. This complete rebrand became significant to the success of the company.

With now double the staff, 10 eager employees helped push Trust Electric Heating to become a UK recognised manufacturer and installer, growth became the focus of the company. Scott’s dream became reality as his patent became approved to launch the cutting-edge and innovative electric heater, the neos, fondly known and named after his son Neo. Neos in Greek also means ‘new’, ‘modified’ and ‘revived’ which the heater most definitely is.

In 2018, they discontinued the import of German radiators as the neos heater were more enhanced, sophisticated, and more importantly, made out of recyclable materials – changing the heating market drastically. The customers loved the sleek style, the choice of colour and the variety of shapes that came with the neos and of course the reduction in heating bills.

Substantial growth meant that we had to increase our premises. Not only did we operate from our original offices, but our metal was also pressed and painted in the other factory in Huddersfield, still retaining the Yorkshire feel. 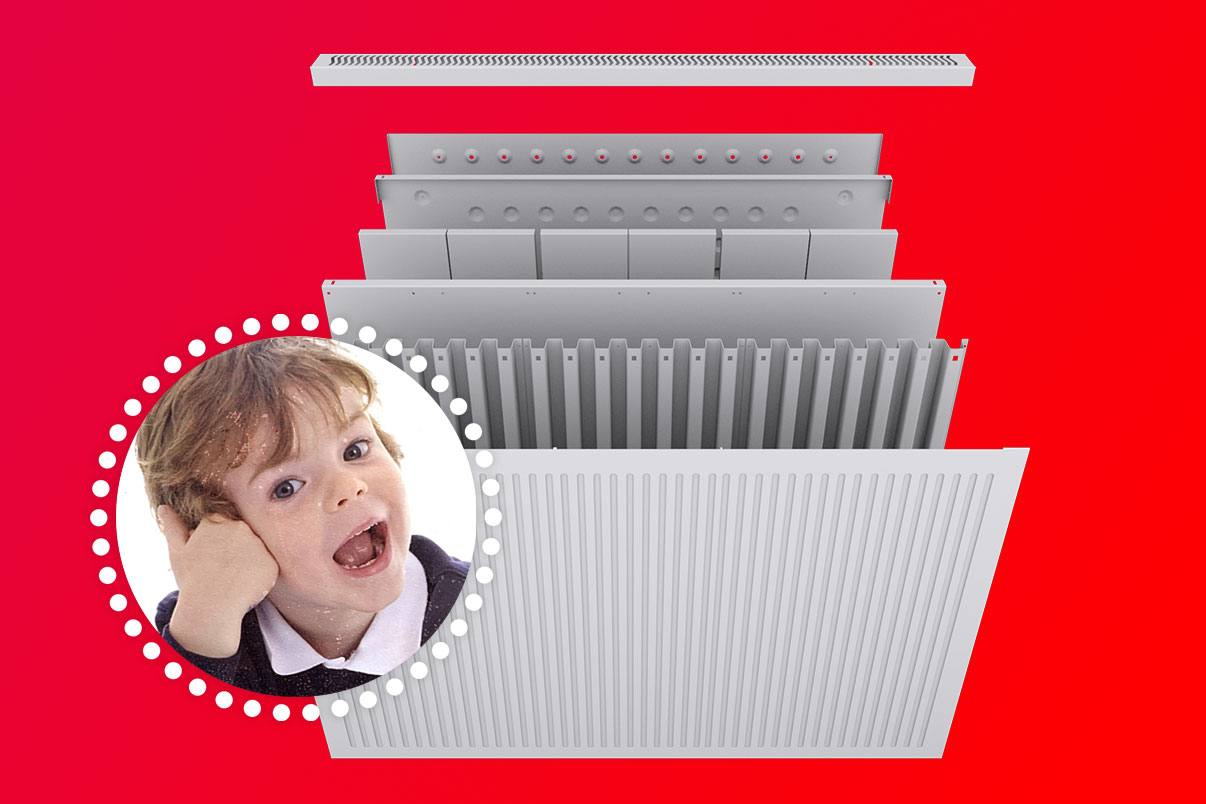 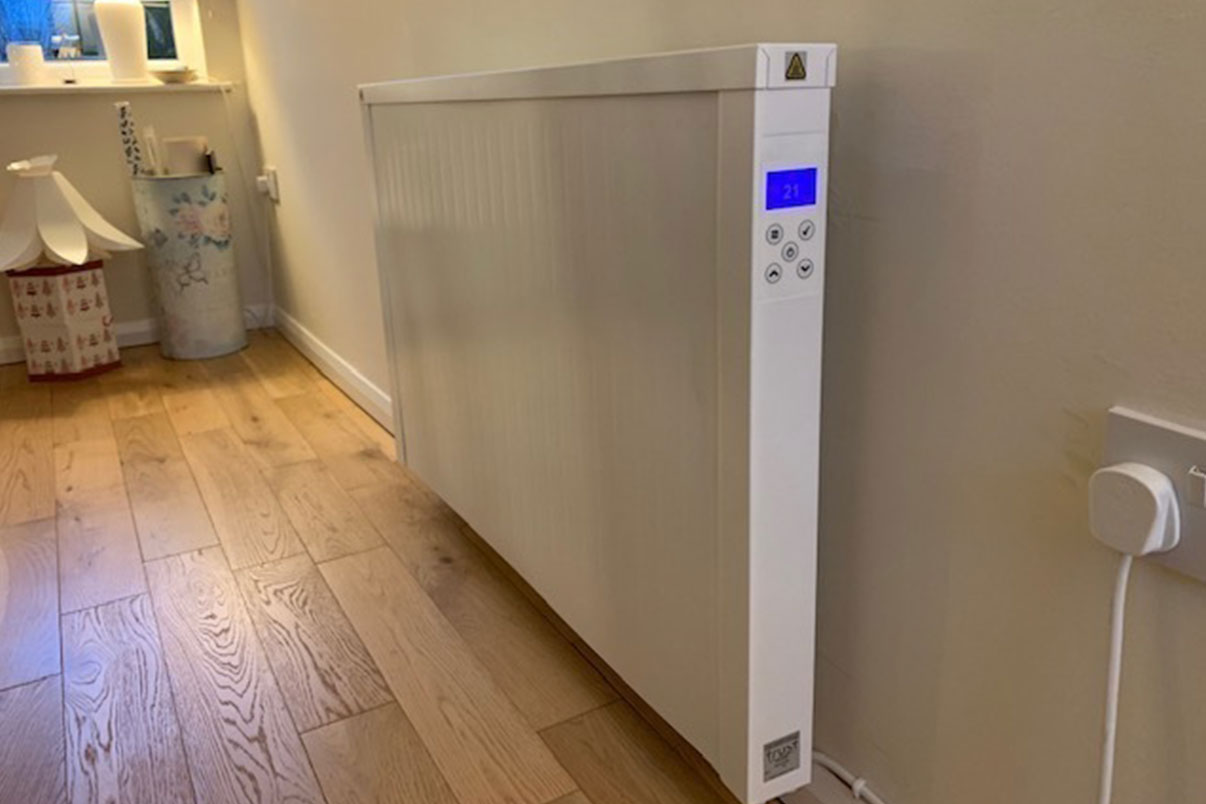 Scott spends the majority of his time on research and at the helm of going to visit potential customers to find out their challenges with heating. On these visits he discovered that there was a gap in the market for the elderly as they could not comprehend or programme the majority of digital thermostats that were available. This is why the ProtoStat was developed. Trust wanted a straightforward thermostat that could be easily programmed, controlled and was easy to see. Additionally, there were issues with some thermostats available as they were not made in this country due to economics and Trust found that the quality and rigour was not up to Trust’s standards. Scott was insistent that the ProtoStat was UK made as he wanted a quality product that had a high specification.

Trust then developed the ‘student bluetooth thermostat’. This novel design can save an enormous amount of energy costs for any student accommodation. Not only does it work parallel with the neos but it increases the savings along with a reduction in energy consumption. We landed our first University which was a very proud year for Trust.

Next came the ‘Radiator Buddy’ an amazing energy saving thermostat for our landlords. Conserving energy for a landlord is paramount and using the Buddy has been a great success.

Not only did we launch new products, we secured a Knowledge Tranter Partnership with the University of Huddersfield. This meant that Dr Karina Zala and a team of professors are constantly testing what improvements can be made to our electric radiators and testing ours with competitors in terms of safety and their impact upon the environment.

A very busy development year for Trust and the research team. 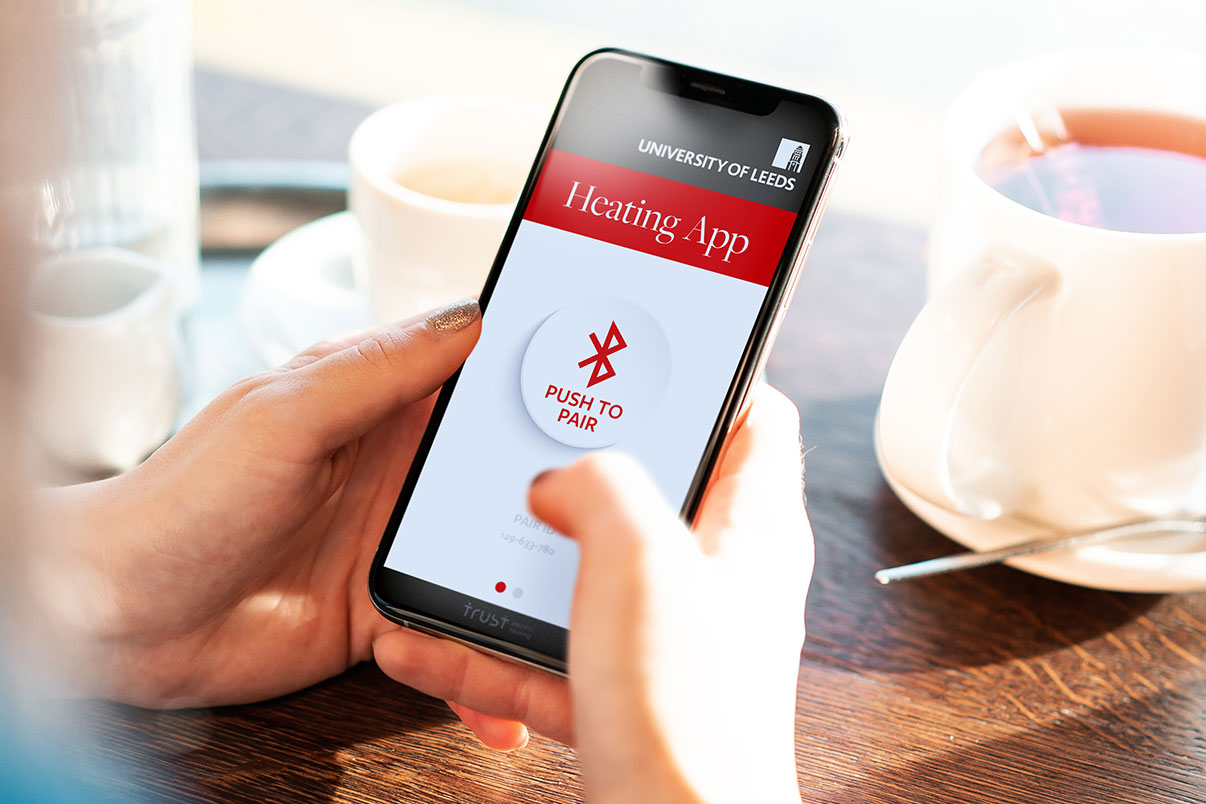 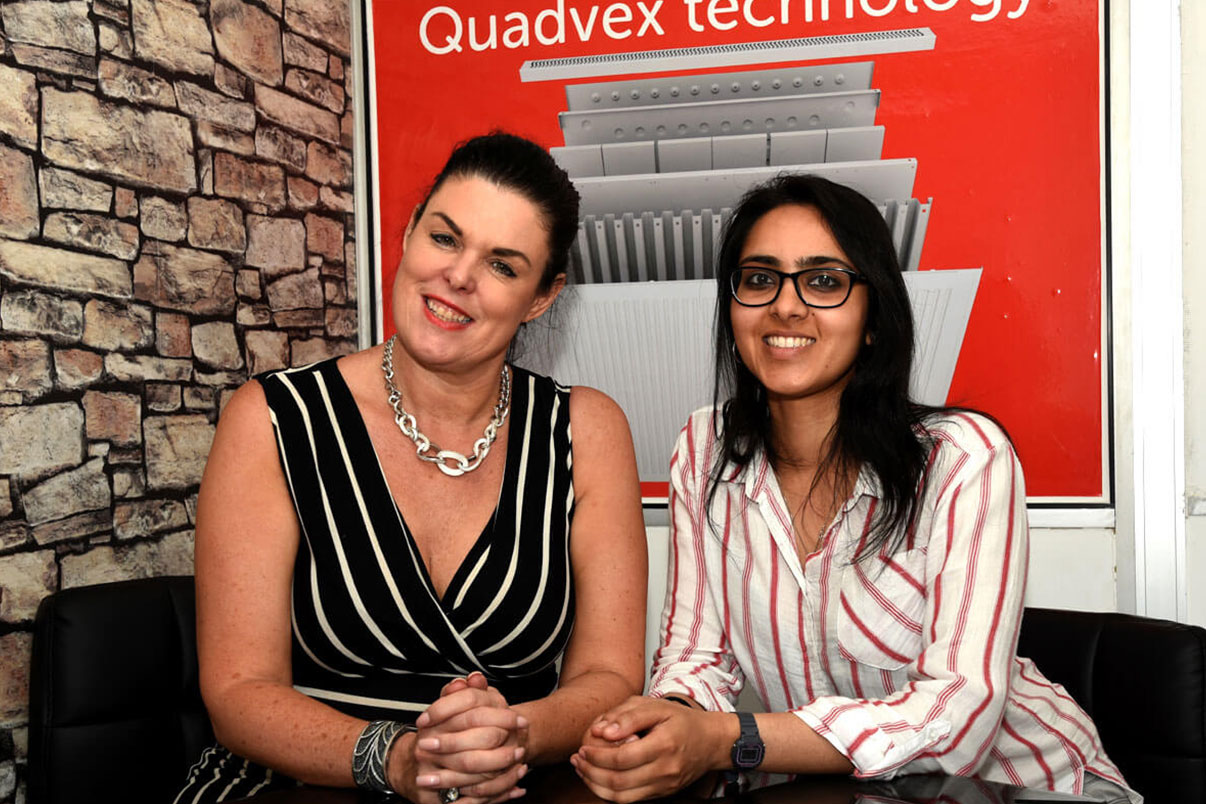 2019 KTP with the University of Huddersfield

Due to Trust’s ongoing research, the next natural step was to be apply for a Knowledge Transfer Partnership – A great move for Trust Electric Heating, using university lab facilities to test products. Click here for the blog post.

2020 brought new staff and a new apprenticeship team in developing young energetic people in moving our brand forward. The team dynamic has strengthened as the Trust family has grown. 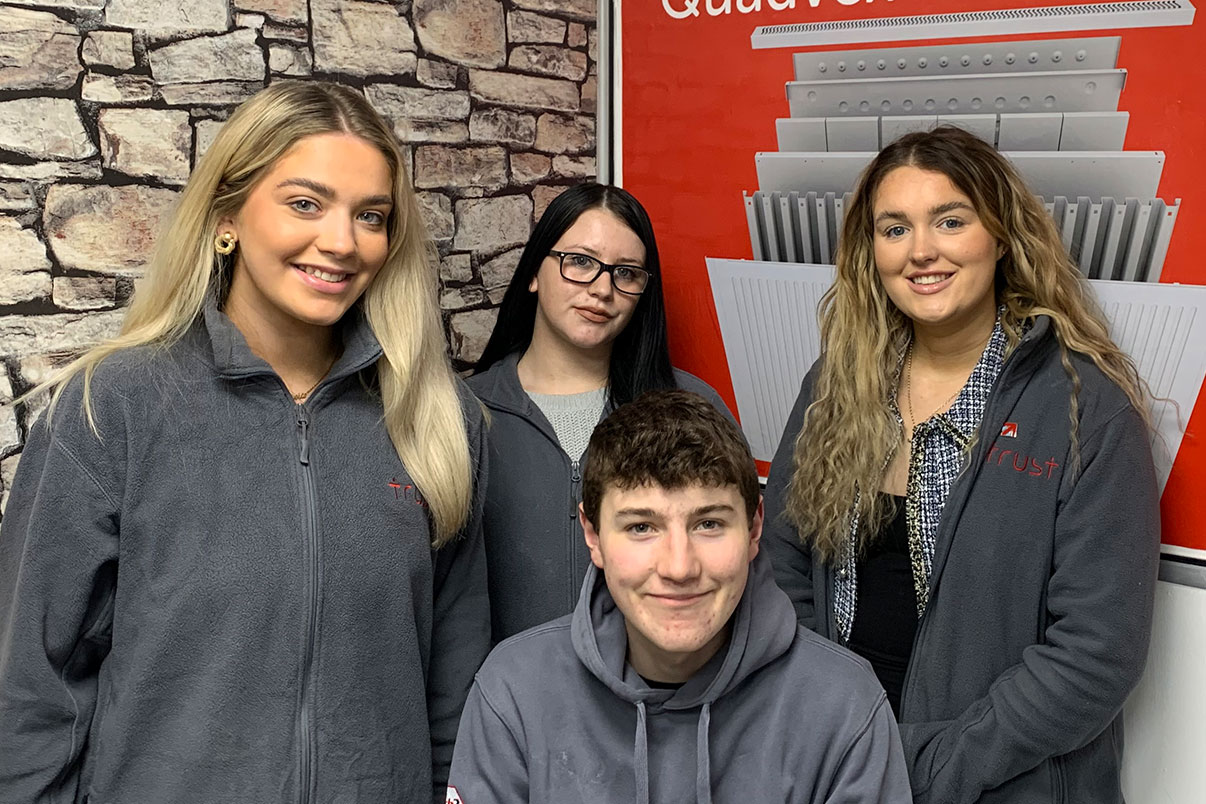 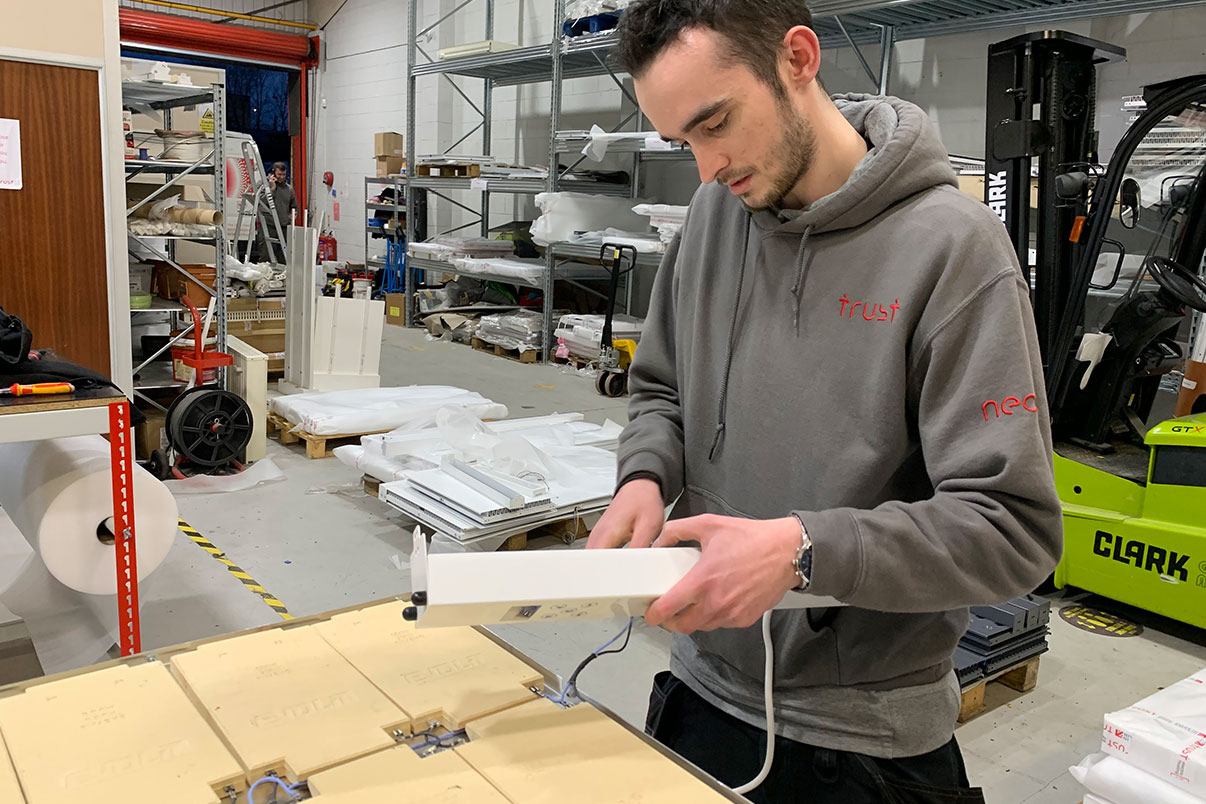 2020 The year that gave true perspective

However, no one could foresee the challenges that Covid would bring and how these could affect the business. Despite the economic challenges, home working did not stop at Trust, in fact it strengthened their position and became a great year as it gave the team an opportunity to refocus. This change of focus allowed Scott to develop a new product called CAVE. Due to the intelligent technology behind the product, along with Trust’s determination to help those in need, they were successful in being awarded an Innovate UK Grant. This meant Trust could create a niche, smart thermostat targeted for the Confined, Adults, Vulnerable and Elderly.

Due to the successful development of the integrated thermostat, C.A.V.E, Innovate UK awarded Trust with a further development grant to transform C.A.V.E into a stand alone product that will work on all electric radiators.

CAVE allows Trust to support this niche group of individuals in 3 areas:
• Remotely taking over the programming of the thermostat in every room
• Traffic light system – amber warnings which evidences a heater that is using far too much electricity
• Reduction in bills – our team will guide the customer and re-programme each heater so that they can reduce their bills.

This is an exciting move for Trust in their development in smart energy thermostats. What a great year we had even with the COVID challenges. 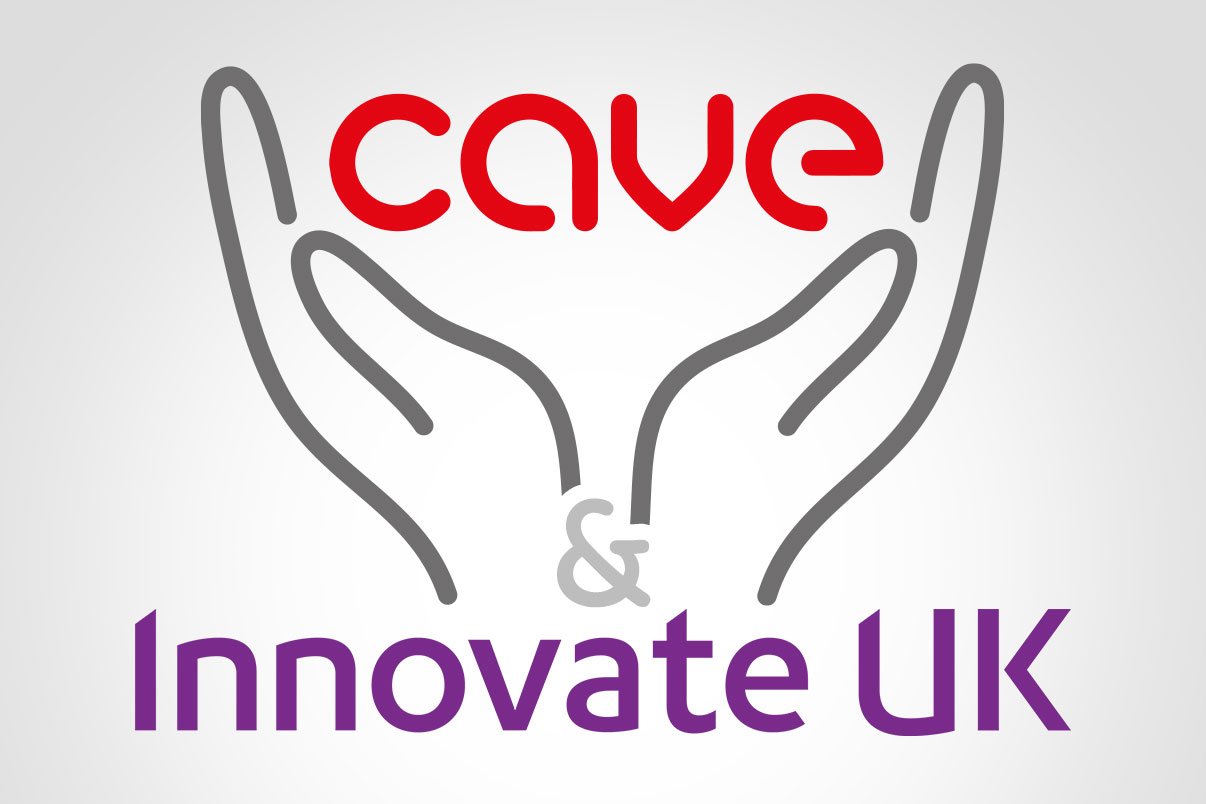 Today, Trust Electric Heating continues their vision that made everything possible in 2013.
Be the best heating manufacturer, installers, innovators, and educators in the UK
...and from the looks of it, things are just beginning.

We obsess about our customers satisfaction. We build up our company by empowering our people and giving them autonomy. We seize opportunities - individually and as a team—to be competitive and industry changing with our products. Our talented team are our superhero’s whose, ‘greatest glory is not never falling, but in rising every time they fall’.

Book a free no obligation consultation